This morning I walked to the same spot on the island Storgrundet as four days ago. This time I arrived there already at 8 o’clock, one hour before sunrise. It was the coldest winter day yet with temperatures round -22 °C. This means two pairs of gloves: full-fingered stretch fleece gloves for handling the camera and warm woollen mittens for keeping the hands warm.

Four days ago the pancake ice had been still floating on the water. The ice floes had been bobbing up and down in the approaching tiny waves that had come from the open sea nearby.

Today the Baltic Sea was completely frozen as far as I could look. No movement, no sound, just a solid layer of ice to the horizon. The shore was coated with a thick layer of ice, too. The ice looked blueish because of the ambient light. No wonder that this time of the day is called “blue hour”.

I went along the shore. There were mainly two types of ice covering the Baltic Sea:

First there was pancake ice frozen together. The floes built a solid layer of ice but you could still see the patterns of the raised edges.

Then there was fresh ice. The ice itself was flat, clear and featureless, but it was completely covered with featherlike ice and therefore as white as the pancake ice.

While I was walking along the shore the colours had started to change. Opposite the sun the sky became lilac, purple, violet, pink. 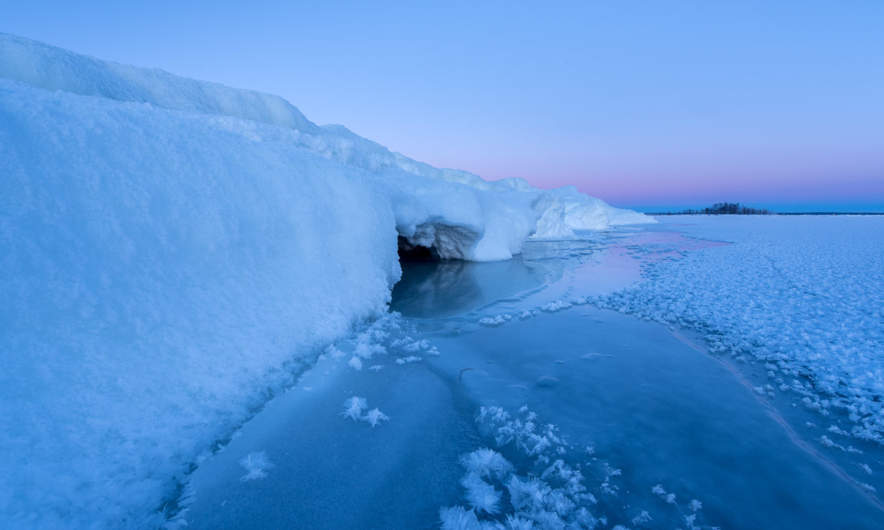 Finally the sun rose and started to illuminate the ice.

The ice in the sun looked orange – the complementary colour of blue. The „golden hour“ had started.

Did you notice the round horizon of the last photo? Today’s the first time I tried out my new fish eye lens. Fish eyes make very special pictures due to their extreme distortion. The last photo shows the effect even more clearly. I call it „My icy world“.

7 comments to “Welcome to my icy world”