The weather on my way home from yesterday night’s chamber choir rehearsal was, well …

It was sleeting and snowing quite intensely with temperatures around the freezing point. I was really glad, that I got a lift, because the driver’s car already had winter tyres – but not mine. When I arrived in Skelleftehamn it was dry, but I could here some rain showers later that night.

This morning it was sunny, -2 °C and the street was icy. Final call for changing my tyres. I arrived at the garage 15 minutes before opening, because I expected loooong waiting queues, but interestingly enough I was the very first. It was a beautiful morning with blue sky and the sun illuminated the yellow birch trees, shone on the frozen puddles and through the ice-covered car windows. Time to take some pictures with my iPhone.

Soon my car was equipped with my winter tyres “Hakka 9” and I could drive to work. I wouldn’t have dared with summer tyres. A snapshot from my way to work:

By the way: “Hakka 9” is how the Swedes call Nokian’s “Hakkapeliitta 9”. These studded winter tyres are excellent, but many Swedes struggle with the Finnish name.

The first autumn colours on Gåsören

21, 22 September – Annika and I are invited by Solveig and Tommy to their summer cottage on Gåsören. Tommy picks us up by boat and after a short cruise we arrive at the small harbour, where Solveig already waits for us.

We have a wonderful evening with delicious food (hand-picked porcini mushrooms!) and inspiring conversations. And the weather is just great – first a blue and sunny sky, then after sunset a starry night. After a short nightly walk to the lighthouse – built in 1912 and still active – we go to bed.

The next morning I wake up early and take photographs of the splashing waves at the eastern shore. It’s a bit windy and the temperatures are near freezing. A lot of trees still have green leaves but some of the birches and rowan trees have become colourful, especially when illuminated by the low morning sun.

After breakfast we take a stroll round the small island together before we get a lift back to the mainland. Tack så mycket, Solveig and Tommy. We are looking forward to meet again!

Fog by the river

28, 29 September – I’m with Annika in Umeå. On Saturday we make a trip to Strömbäck-Kont, one of our favourite locations by the sea. Again the weather is sunny but due to the frost of last week’s nights a lot of more trees show coloured leaves. Especially the bright yellow birch leaves look wonderful.

On Sunday I wake up early as usual and take a promenade along the Umeåälven, one of Northern Swedens largest rivers. The morning air is damp and chilly and the landscape is fog-shrouded. The fog muffles all sounds and noises and gives me the impression of being completely alone. Half an hour later the fog goes away and the magic is gone.

Yesterday, 2 October – at 3:00 I’m awakened by storm squalls shaking the house. I almost expect that my house is lifted up and lands on the Wicked Witch of the East. But the gale is no tornado and my house resists the squalls.

The weather doesn’t come completely unexpected, both wind and enormous amounts of rain have been forecasted. But as usual the forecast was – ahem – imaginative but at least the wind speeds are quite accurate.

Today, 3 October – again I’m awakened at 3 o’clock, this time by a hail squall drumming on the window. It’s round 3 °C and even colder at 7 o’clock on my way to work. Between my home and the town another rain squall buckets down. It is mixed with wet snow. Beside the road I can see white patches. Is it snow or last night’s hail? When I arrived at the office at Solbacken outside of the town of Skellefteå I see, that it’s snow grains – tiny frozen white balls.

At 8:33 I look through the window of my current office room and it’s snowing. The first snow on 3 October – exactly the same date as last year. Now I’m longing for winter even more ❄︎ !

This morning I stood on the lake Snesviken to watch and take pictures of the moonset. You read right – I stood on the lake. The ice is already at least 5 cm thick and bore my weight. Beside of that the water wasn’t deep at that spot.

After the moon disappeared behind the line of trees at the opposite side of the lake I looked for other motives. No snow has fallen the last weeks and the ice was transparent and clear. I spotted cracks and bubbles of air in the ice and even a lily pad, dotted with many tiny bubbles.

One of the cracks fascinated me. Looking from the side the tiny air bubbles looked like vertical dotted strokes, like another world.

I tried to get nearer with my macro lens to explore this little world, but if was quite complicated to take a photo of this small crack. The best snapshot:

And that’s how it looked like, when I made these photos:

According to the weather forecasts the temperature will stay below 5 °C for the rest of the week. But that doesn’t effect me, because tomorrow I’ll fly to Paris for some days. See you later!

When I woke up this morning it was still dark outside. It snowed. Big snow flakes fluttered downwards, where most of them melted instantly. They felt however comfortable on my car and started to cover it with a wet layer of snow – the first snow of the season.

It snowed in Skellefteå, too and I took a short stroll along the river before job. Temperatures were slightly above zero, so the falling snow was wet and didn’t last long. Anyhow it managed to cover the leaves, the grass and things made from wood. 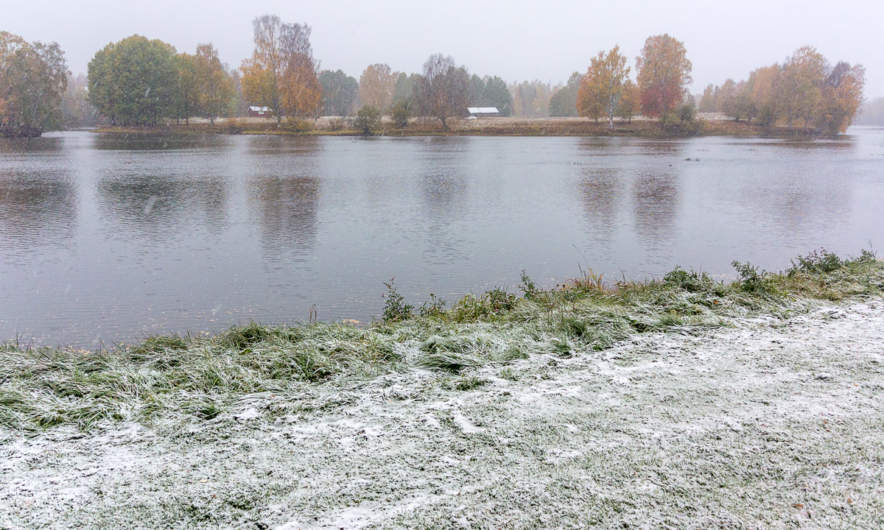 I’ve been living in Sweden for more than eight years now. The earliest snowfall in Skellefteå/Skelleftehamn I experienced before was on a 14 October, but normally the first snow comes round the end of October or even later. So this year it’s quite early.

I do not long for the winter yet, because of all the coloured trees and bushes. They are so beautiful. But as soon they will become leafless I’ll be eager for the first cold days and snow that doesn’t melt away instantly.

It’s still quite warm in Skelleftehamn, hardly below 10 °C the last nights, but today it rained and some of the birch trees start casting off their leaves. Summer 2018 is history, autumn is coming.

This page shows all articles with the category Leaves