Next morning when we woke up in Å we could see blue sky through the fogged car windows. The rain has stopped. We made a walk through the little fishing village and had breakfast on the cliff with a fantastic view on the mountains and the sea.

After that we continued our trip through the incredible landscape of the Lofoten. We had to stop several times to take pictures, for example of this small mountain lake near the road to Nusfjord: 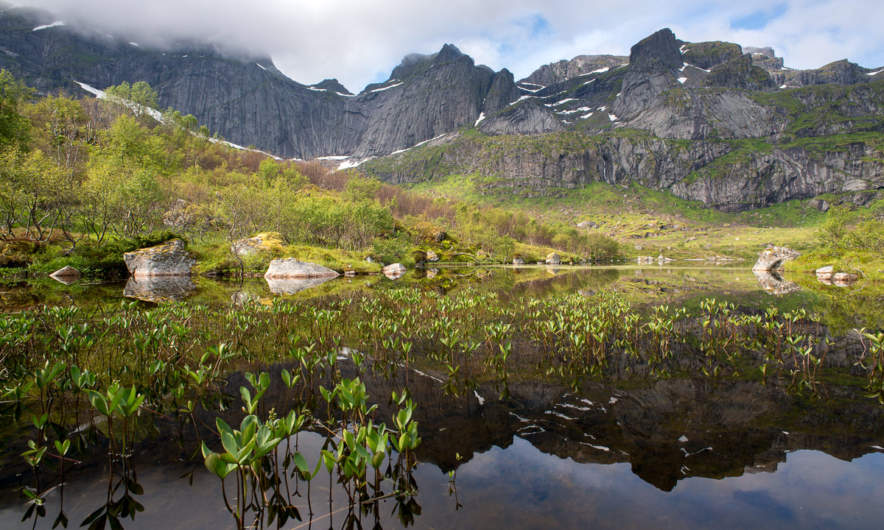 Later we came to a place that became quite famous over the years: Uttakleiv – a beautiful sandy beach that just invites you to jump into the turquoise-coloured water. It almost looks Caribbean but as soon as you enter the ice cold water you’re reminded of being in Northern Norway, not in the south. The bath was fun, anyway.

Here we stayed for a while and enjoyed the sun. But after a while we continued our road trip to Brenna on the island Austvågøy. We didn’t find a camping ground at the end of the road and turned, but soon we stopped the car again. Actually because I wanted to take pictures of the sheep that lay at the sandy beach, but some children nearby discovered something much more interesting: A fox cub. I changed to the telephoto lens and I came quite near. Probably the fox hadn’t made any bad experiences with humans yet.

After that we stopped at a camping ground near Rystad that we already saw on the way to Brenna and decided to stay overnight. Soon the tent was put up on the grassy ground. Slowly the sun went round the mountains and sank down. The next hours were incredible – the light was so wonderful, both the sunlit main land in the south and the sea in the north glowed in the most fantastic colours. But have a look by yourself:

Round one o’clock we lay down in our tent, but only because clouds came and it started to rain a bit. What a wonderful first day on the Lofoten!

5 comments to “From Å to Rystad”