After our five day hiking tour in the Swedish Mountains a week of Annika’s and my holiday was left. We entered the car and left Storulvån. Shortly before we approached the E14 I asked Annika: “Back to Umeå or Norway?” The answer was: “Norway”. So we travelled to Norway …

After visiting friends near Mosvik we decided to drive north to Mo I Rana, but neither on the direct way, nor on a single day. We made a two-day stopover in a fantastic cottage between Torget and Brønnøysund. On the other day we drove to Torghatten, a mountain in the south of the same island. There’s something special with this mountain: It has a huge hole. From the parking place at the foot of the mountain a path leads up to the hole and through the natural tunnel to the other side. We slipped into our boots, took the cameras and went up. 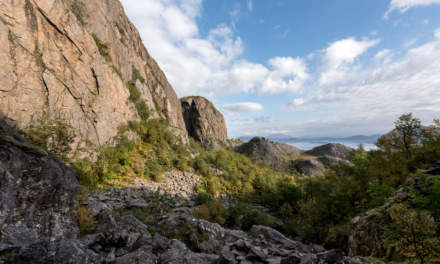 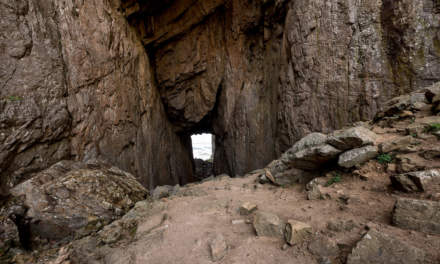 We put ourselves on a large stone and looked at the landscape behind: The rocky slope, the tiny red farm house, the beaches and the sea with its many islands. We could have continued on that path, which leads further, but then we had to go round the whole mountain on a gravel path at the end. So we just returned the same way.

An impressive tour, that doesn’t take much time. Don’t miss it when you’re near Brønnøysund. And take your wide-angle lens with you!