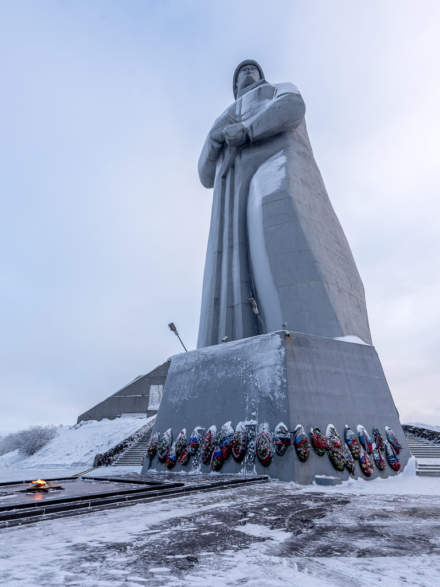 When we arrived in Murmansk the day before it was already dark and we were tired. Today after breakfast we were eager to explore. We ordered a taxi to our first tourist attraction: The Alyosha Monument.

It was build in 1974 and it’s the second-tallest statue in Russia. The 70th aesthetics and the communistic concrete appeal didn’t help to make me like this statue, but I always have difficulties with war memorials. I’m a pacifist. 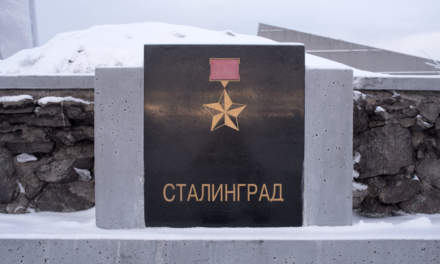 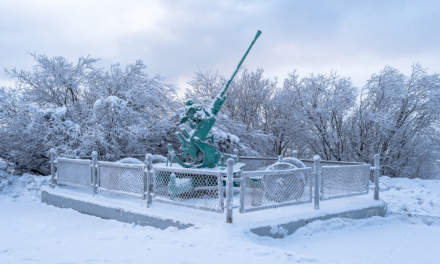 I enjoyed however the view over Murmansk. It was visible, that it’s a large town (it has 300,000 inhabitants) with a large port and many concrete high-rise buildings.

After we visited Alyosha we started to walk back into the center of Murmansk, where our hotel Azimut was located. We turned right into the street Ulitsa Aleksandrova. To the left there were old concrete buildings. They were extremely rundown and I was shocked to see these building and imagine people living here. Maybe the inside would look nicer, but the outside was horrifying.

In many directions you could see these high-rise estates with rectangular concrete buildings. But we could see something else: a Ferris wheel. We went on and came to a permanent amusement park, located beside the lake Semyonovskoye (Семеновское озеро). Of course the lake is covered with ice and snow in wintertime and some locals used the ski tracks going round the lake.

From that place the next destination was quite near: the Church of the Savior on Waters (Спас на Водах), a small Russian orthodox church, built 2002. 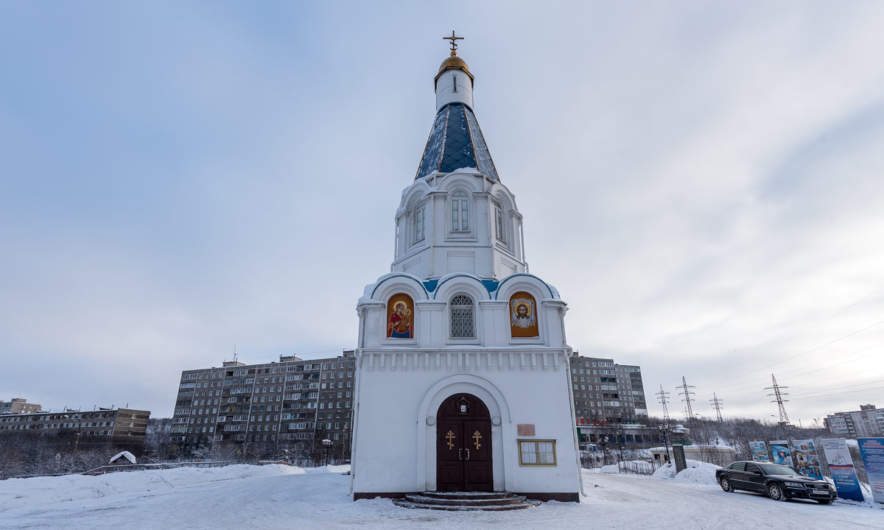 When we came to the church I could see some people leaving, going backwards and making the sign of the cross again and again. It is allowed to enter the small church but not to take pictures. I’ve never been in an orthodox church before and I was stunned. The walls were covered with icons of saints and incense was burned. Some elderly women were lighting candles and immersed into deep prayers and almost seeking physical contact to the icons and other objects. I felt deeply touched by this lived religiosity although I’m not religious by myself. On a table some food was placed. Bread and fruit, among others a bag with three lemons. Sacrifices or donations to the priests?

I have to admit that I felt like an intruder and completely at the wrong place. I have to read more about this religion and a bit about how to behave.

We continued our promenade back and passed the Memorial Complex to the Soldiers and Seamen Who Died in Peaceful Time. 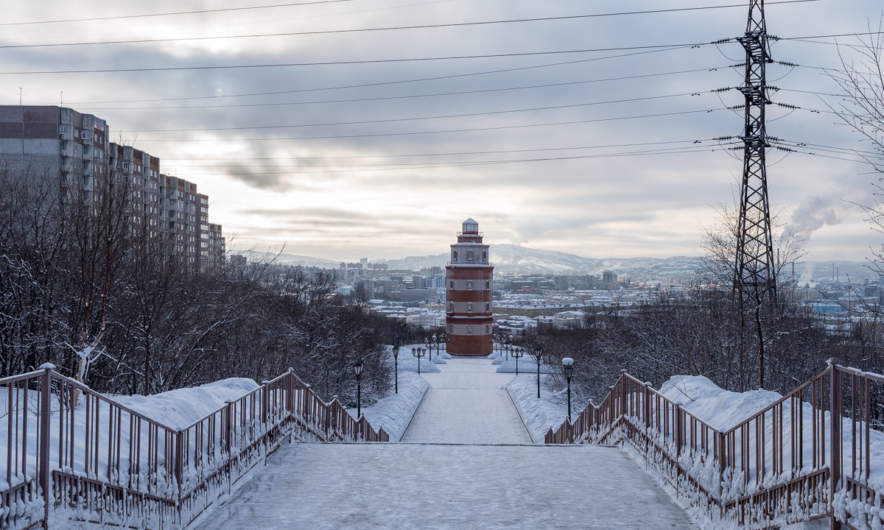 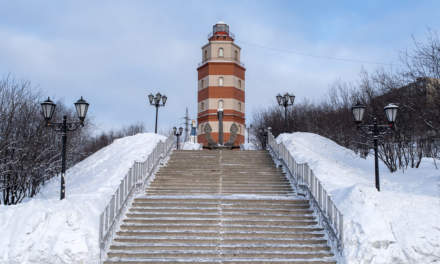 We left the memorial behind and entered the streets of the center. We walked back to our hotel and took a short rest. We passed an old theatre, painted in bright indigo but more a ruin than a building. A pity, I think it must have been beautiful in former times.

Then the hotel. I had twisted my ankle one week ago and was glad to rest the foot a bit. Time for shooting some photos from the 16th floor. 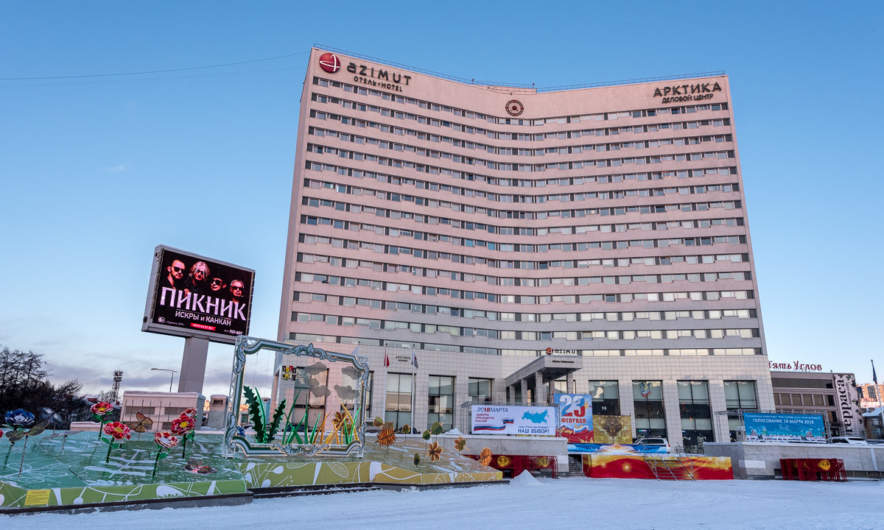 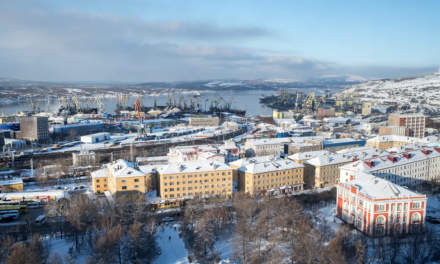 Some hours later. We decided to eat dinner and Annika and I found the restaurant Tundra (Тундра) that got excellent reviews in the internet. And excellent it was. The restaurant was fully booked but we were allowed to sit in the bar. In Russia the food is quite cheap compared to Scandinavia even in really good restaurants. The dishes are not as huge as in many places in Europe. I like that because it gave me the opportunity to taste different things: borscht and caviar with seaweed. Both very tasty! 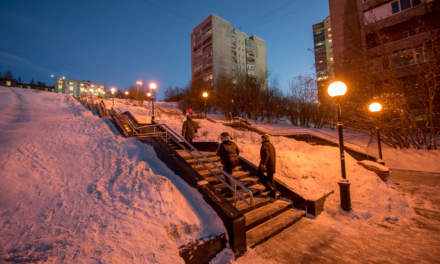 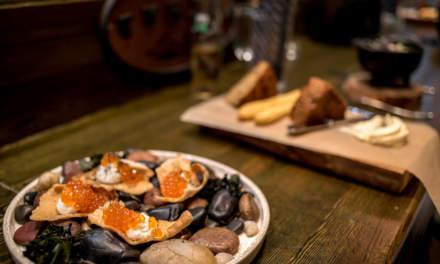 After a nice evening at this great location with fantastic food we went back to the hotel. Murmansk is definitely not the most beautiful town in daylight but it wins a lot when it gets dark because many places, streets, parks and buildings are illuminated with lights of all colours. 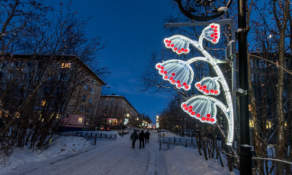 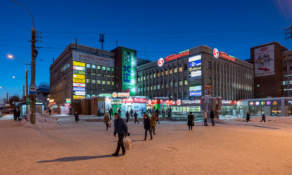 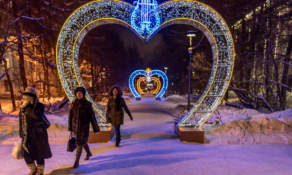 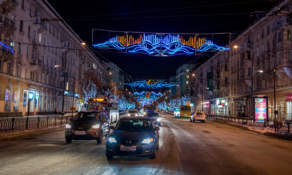 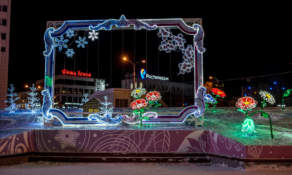 We have seen a lot that day, both the beautiful and less beautiful facets of this arctic Russian town and I was as exhausted as I use to be when strolling through a big town for a whole day.

We were glad however to have another day to explore a bit more.

Some other random pictures of the day: 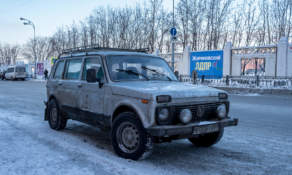 4 comments to “A trip to Murmansk – day one”