After our stopover in Kongsfjord we continued the road 890 in direction Berlevåg. The road follows the coastal line of first the fjord Kongsfjorden and then the open Barents Sea. Our destination for today is Kjølnes Fyr where we planned to stay over for one or two nights. 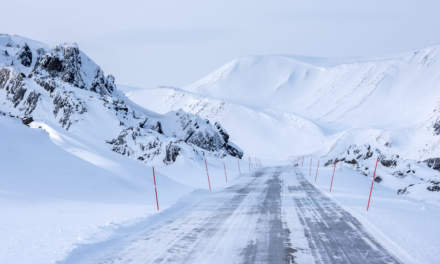 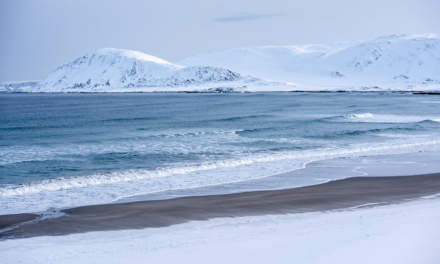 Kjølnes Fyr is located on a small headland called Kjølneset 5 km east from Berlevåg. We had booked a two-bed room at this place because it looked more interesting than the “large” city Berlevåg with its round thousand inhabitants. At half past one we arrived. 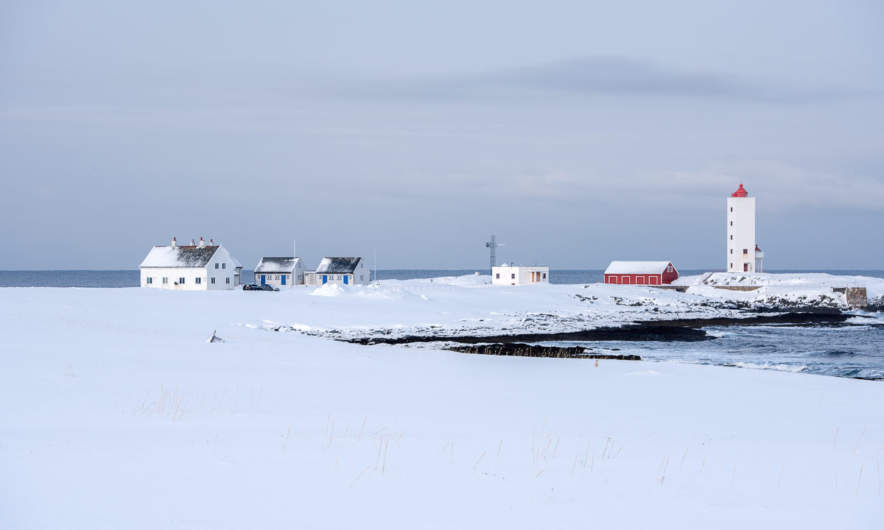 I directly fell in love with this place. The lighthouse – some other houses around – a rugged rocky coast, partly covered with snow, partly with seaweed – to the west bare mountains and to all other sides the open Barents Sea.

If you started a boat trip from Kjølnes Fyr heading north, the next land you would approach would be Kongsøya, part of Svalbard.

Viggo who operates the lodging gave us the key to the lighthouse and we took a closer look. The original lighthouse from 1916 was destroyed in World War II, the new lighthouse was built in 1949 and has a very functional and sober appearance. We went up and looked over the Barents Sea watching the high waves breaking at the rocky shore. 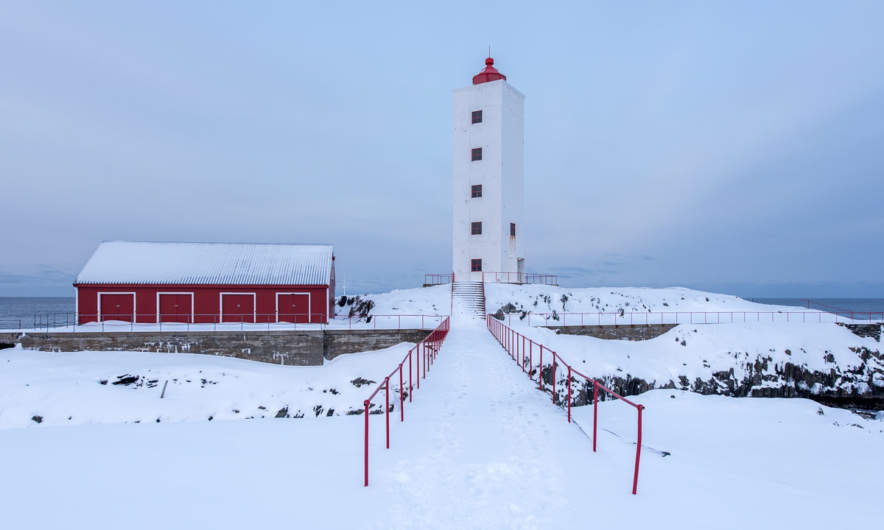 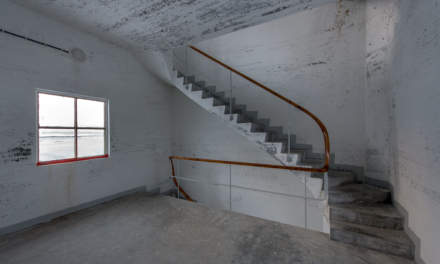 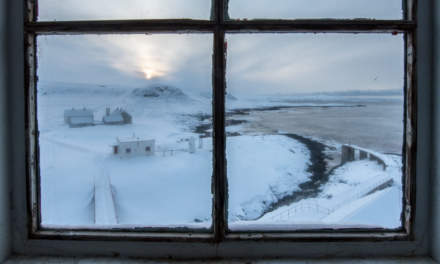 Viggo and his wife moved to Kjølnes Fyr in last autumn. He has rented the houses, that are protected as a historic monument. He told us from a winter storm that he experienced in January. Wind speed was up to 70 m/s (~250 km/h) and the upper floor of their house was shaken so violently, that the vibrations moved around the furnitures inside. Compared to that experience we had it quite calm.

The only thing we made over daytime was driving to Berlevåg to buy food. In Norway almost all shops are closed on Sundays and there were things we needed (spaghetti …) and things we wanted (chocolate …).

Later that evening we drove to Berlevåg again to see the Hurtigruten ships coming in.

Under the night the wind got a bit stronger and the waves approaching from the north had become higher. Annika and I took a really lazy day. I was outside several times, but only for taking photos of waves. They never broke at the same place twice and gave me a hard time making pictures. 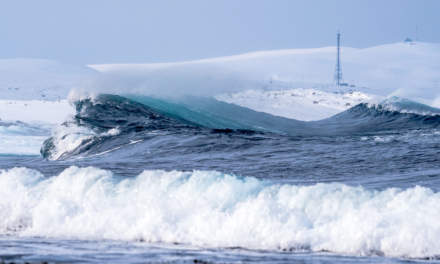 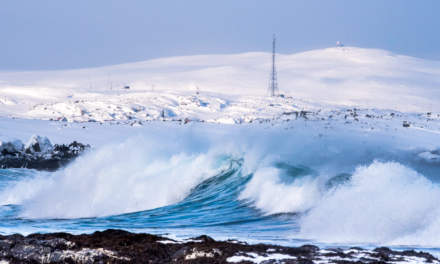 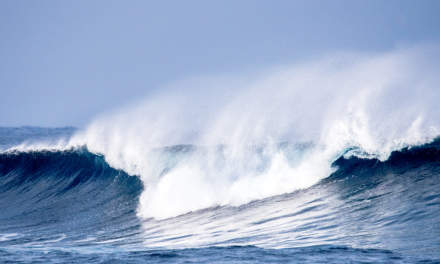 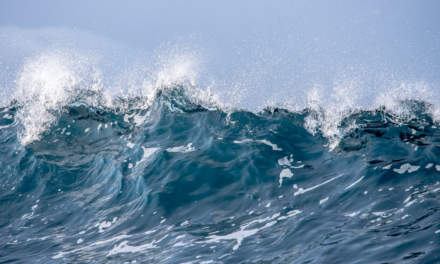 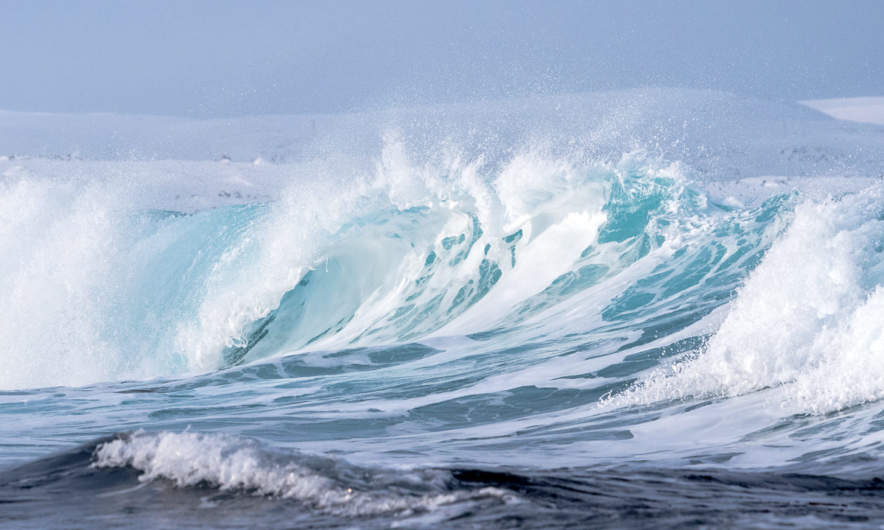 Weather became worse the whole day: The wind increased more and more and it started to snow, which means that snow was thrown into my face vertically when I dared to look into the wind. When it started to get dark, the ice and snow covered rocks in the cold light of the blue hour made the landscape look as what is actually is: arctic. 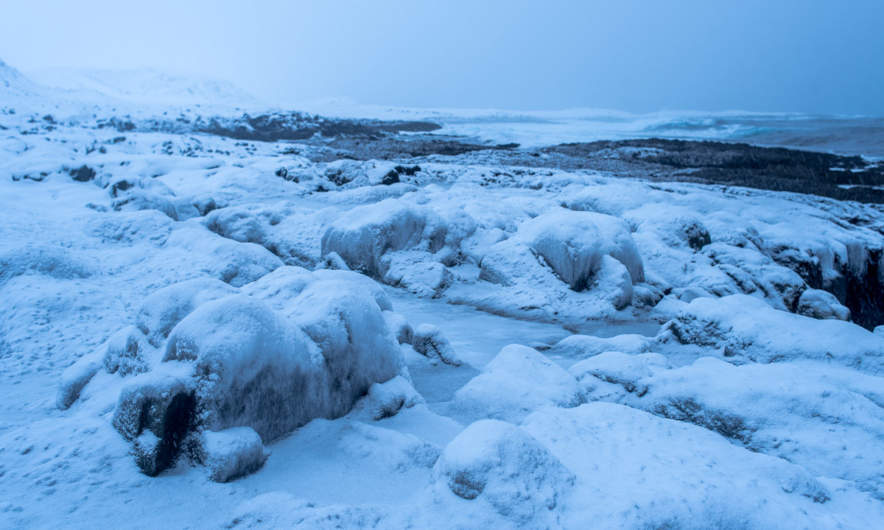 Already in the afternoon the Norwegian Meteorologisk institute had issued a class one wind warning for the whole area. I started to get a bit nervous. The next day we wanted to continue to Båtsfjord, our last stay on our Varanger trip but I was not sure whether the weather would allow it. Anyway, all roads were still open.

It had snowed a lot in the night and still was snowing heavily. Due to the stormy wind parts of the ground were completely bare of snow while other parts were covered with knee deep snow. At the same time it was quite warm, hardly below zero. The weather warning was extended to the afternoon but wind should decrease a bit over the day, so we planned to start round 12 o’clock. I was out and took some more photos, but it was really rough weather, especially for the camera. 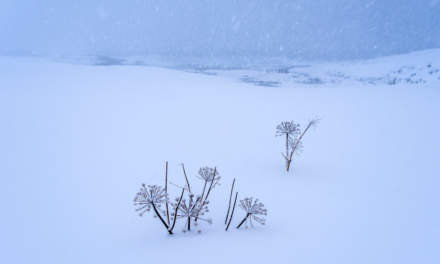 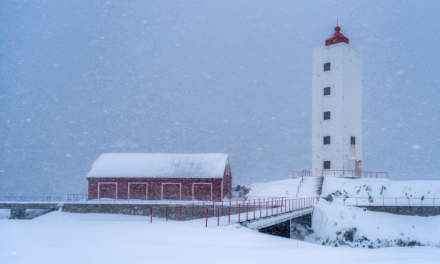 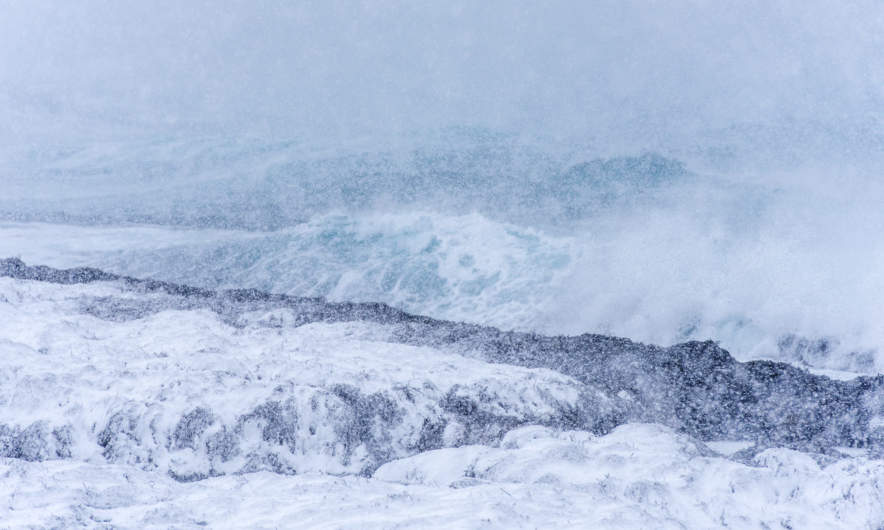 Right after breakfast Viggo got a call of another guest approaching from Berlevåg by car. She couldn’t find the departure to Kjølnes Fyr due to severe weather conditions and asked for help. He took the car and drove to the main road just to mark the departure visually. When she came in she looked quite exhausted from the short car trip. She advised us not to continue the trip that day and told us, that visibility was partly only 10 meters which would make it impossible to see the next way mark.

We waited some time but despite of the stormy wind the visibility looked really good. Therefore we decided to give it a try and drive at least to Kongsfjord, that we passed two days ago. Here we could either continue our trip or take a room and stay in Kongsfjord overnight.

So we packed the car, said goodbye, removed the snow from the car and started our car trip to Båtsfjord at 11 o’clock.